Nominally about a 30 year old drug that has been used to treat Parkinson’s disease and high prolactin levels, Bromocriptine actually deals with the issue of how the body regulates bodyweight, hunger and how those systems change with dieting. As it turns out, the drug bromocriptine happens to trick one of those systems and can help to eliminate many of the problems that occur with dieting.

Bromocriptine is a dopamine agonist drug that has been in use for over 30 years.  Due to it’s chemical structure it acts like the neurotransmitter dopamine in the brain.  For this reason, it has been used medically for many conditions.  Probably the most well known is Parkinson’s disease but there are others.  Acromegaly (the disease Andre “The Giant” had) and elevated prolactin are two.  You are probably wondering what role it has in body composition.

As I’ve discussed in both my book and on my website, the body regulates body weight, body fat and appetite.  This occurs through a number of hormones with leptin and insulin being two of main ones.  As it turns out, these hormones exert at least some of their effect through dopamine levels in the brain.

When people diet and those hormones change, dopamine levels in the brain decrease, causing a host of effects.  This includes metabolic slowdown and increased hunger.  As well, tasty foods taste better.  Dieter’s attention to tasty foods is even increased.  When you’re dieting, you notice those foods more.

All of this is a concerted attempt by the body to limit further fat loss and/or cause fat regain.  And this is where the drug bromocriptine comes in.  By sending a dopamine like signal in the brain, bromocriptine can offset the normal adaptations that would occur.

Topics in the Book

The book begins with an overview of the bodyweight regulation system, including the role of leptin and insulin.  This leads into a discussion of the concept of leptin resistance and the role dopamine plays in all of these pathways.

The rest of the book addresses how bromocriptine (or other dopamine agonists) can be used along with the potential risks or side effects.  The book includes a look at the FDA hearings on the use of bromocriptine for diabetes treatment.  The book is fully referenced for those who wish to dig deeper. 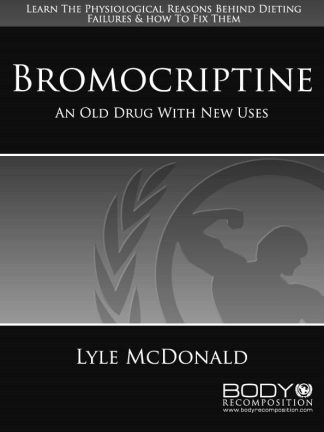